To anyone who knows me. I mean, really knows me (there aren't that many of you, let's be honest).. it will come as no surprise to hear that I don't like myself. I'd venture to say that most of the time, if I stop and think about it, I hate myself. A large portion of this dislike is my physical self, which is what I want to talk about today. I've been overweight my whole life. There are a couple of pictures of me around the age of six where I was plump but not conventionally "fat" and I suppose, though I detested myself in high school I'd really love to be back in that body.

Anyway. I am overweight. Fat. Obese. Disgusting. Not worthy of love or consideration as a person. Do other people actually think this or is it just me, inside my head? Not sure. I know in school people were cruel. Walking down the street in the city, people were cruel. Strangers were cruel. Family was cruel. After more than thirty years of real people and all manner of media telling me that I'm awful, is it any surprise that I believe it?

Sigh. Okay, the obvious thing that needs to be stated (this upsets me, because it shouldn't need to be stated. but again, people are both intentionally and unintentionally cruel): yes, I've tried to change. I've changed my diet. I've exercised. Do you think as a seven year old I thought to myself "Hey! Let's be fat! That'll make EVERYTHING in life easier!" and just stuck with it since? Do you think I choose to be this way? I mean, a lot of the internet will say something like "obviously you chose this, otherwise you wouldn't be an unhealthy, fat, freak. Duh." Anyway. I'm not justifying. I'm not rationalizing. I'm not going to argue. I've learned over the many years that if you are dead set on seeing me in a certain light, nothing is going to change that.

Well meaning people on the internet (who are not overweight, in my opinion - regardless of the arbitrary and outdated medical definition) like to say things like "your body allows you to do things, so love it no matter how it looks. make positive changes and live for yourself. all bodies are great!" I get you. I appreciate your thoughts. My body is not healthy. It does not allow me to do things. My spine is damaged, I cannot bend like a healthy person - regardless of my weight. I have chemical imbalances that prevent me from doing.. I mean.. a lot of things. Those chemical imbalances are part of my body. My lungs don't work properly. And never have. I have nerve damage in my lower back that affects my legs. I have nerve problems in my elbows that affect my hands. I am not healthy. And if you try to blame it all on my weight.. ugh.. then just go away, I don't have time for you.

That said, this body grew three healthy children. Grew them, birthed them, nourished them, and is raising them. Surely that counts for something, right?

Okay. But what was the point of this mind vomit? Here we go:

Because I'm raising impressionable young things, I try to be mindful of the sorts of things that come out of my mouth. My words can have more power than I'm comfortable with at times. Still, I strongly dislike myself and things slip out. Everyone in this house has heard me say negative things about myself. But sometimes.. I'll say that I'm fat and stupid, for example. My middle son will hug me fiercely. My youngest will likewise hug me and tell me that he doesn't think so and that he loves me more than anything.

Think about that. The cruel among you are thinking "it's because they don't know any better" and don't think I haven't had those thoughts myself. But get this, I'm allowed to hate me. You don't even know me.

So my seven and nine year olds give me comfort. Here's another thing that happens. My nine year old and I will be doing something. The limitations or difference on my part will be noted by him. Let's face it. An overweight thirty-seven year old can't do the same things a nine year old boy can sometimes. He'll say something in agreement, of course I can't xyz, I'm bigger than he is. My fifteen year old will (almost literally) spring to my defense. He'll get super angry that his little brother would *dare* say something like that. I appreciate his intentions, but I've also tried to explain that little people (and a huge number of adults) lack tact and that it's something they learn.

Okay. So what? My family loves and accepts me for who I am. They don't hold my appearance against me. They. Accept. Me. Even when I don't. We won't even go into how they all are understanding and helpful about my anxiety. They love me despite my weight. Maybe this shouldn't amaze me the way it does. But.. it does. And I'm not taking credit for them being this way. They're just amazing, thoughtful, and kind human beings. And I adore and appreciate them.

I suppose, to an extent, I've written this so that I can come back to it when I need to. I've felt very out of place lately. I don't fit into the online communities that I'm supposedly a part of. I've been deeply feeling my physical limitations lately. I will continue to work on myself. Both physically and mentally. But it's worth remembering that my family - the one I chose, the one I made - they love me for me, even in spite of.. me.
No comments:

This is a mash of several recipes. Namely this one and a vegan lentil one that I'm currently unable to find (will update later if I rediscover it's origins).

What I do (I'm lazy. And I cook the same way I review books these days - sloppily and with much emotion, though usually internalized):

In a big stock pot saute a diced onion in olive oil (or if you're out of onion skip to adding water, then add spices - including powdered onion). Add spices, stir, let cook while frantically looking for a can of diced tomato. Add can of tomato (or sauce if you discover you're out - but it's better with diced tomato in my opinion). Add two cans of water (who needs measuring cups, right?) and a splash of apple cider vinegar. Drain several cans of beans. I like to use garbanzo, black, and pinto. Add to pot. Add about a cup of dried lentils. Add leftover guacamole or as much avocado as you have lying around - it can take a great amount and taste amazing. Shake in about half a cup (I've never measured this in my life) of ground flax seeds and.. er.. a quarter of a cup? A third? A generous amount of nutritional yeast. Because deliciousness (if you don't have this or don't like it, I imagine it'd be just fine without it).

Hmm. Stir, cover, simmer for as long as you can stand (at least 30 minutes - lentils need to cook. I often let it go for about an hour when I forget about it, though). Try and stir it regularly or your teenager in charge of doing the dishes will yell at you for having to clean the stuff stuck on the bottom of the pot.

Once you're ready to eat, grab a stick blender thing and blend the holy heck out of it. It will end up being delightfully lumpy and surprisingly similar in texture to the meat chili we used to make before I decided that was gross and please don't make me eat animals anymore.

Serve with pasta. Or fritos. Or whatever. With lots of cheese (because we're terrible vegans here and cheese is delicious). Freezes well, pleases most of the monsters in my house.

Let's see if I can make a list of things you need and quantities..

- diced onion (or copious dried onion powder)
- can of diced tomatoes (any size works but I use the 15-ish ounce ones)
- three cans of beans (the 15 ounce ones) - i use black, pinto, and garbanzo/chickpeas
- two cans of water (to get all that tomato out.. right?)
- a splash (tbsp?) apple cider vinegar
- spices
- at least 1 tsp salt (but taste and add more if needed later - I don't measure this one either)
- 1/4 cup chili powder (heaping or however you like)
- 1 tsp cinnamon
- 1 tsp cumin (HEAPING BECAUSE YUM)
- 1/4 tsp allspice
- 1/4 tsp clove
- 1/4 tsp cayenne
- 3/4 tbsp cocoa powder (or some bittersweet chocolate chips when you realize you're out of cocoa powder)
- 1 cup dried lentils
- 1/2 cup ground flax seeds (I use golden flax meal because it's what I have)
- 1/4 cup nutritional yeast
- several avocados or leftover guacamole

Oh gods, did this make sense? I don't cook like a sane person, I'm sorry!
No comments:

Don't know what to read next. Help! 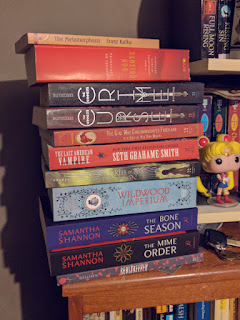 Splurged at bookoutlet.com (and amazon for Genki). 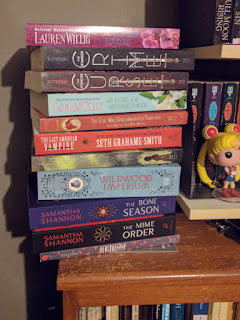 (three of the above I've read before but needed on my shelves for rereading: The Orchid Affair and The Lure of the Moonflower - both by Lauren Willig and Beastkeeper by Cat Hellisen. Oh wait. I also read The Bone Season by Samantha Shannon. But I need to reread it before I get to The Mime Order.) 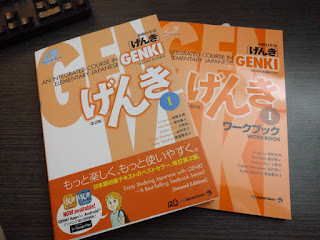 Next indulgence once the third Maggie Hall book comes out in paperback. World's End? Something like that.
No comments:

Home school can be hard. Finding secular science curriculum that doesn't cost a small fortune is also hard. I cobbled a curriculum together using CK12 and a biology coloring book. 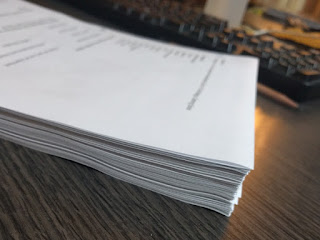 Now I just have to write up algebra 2, Japanese, 2D animation, and computer literacy lessons. And fit them all (along with Oak Meadow world lit and geography and the aforementioned biology) into a schedule that has a chance of working out for us. To think, I need to have it all done before August, too!

I think I need another coffee.
No comments:

Learning Japanese is hard. That is all.
No comments:

A companion for Geralt. And because I need (on an emotional level) a gift to give to B on his *actual* birthday..

Used the Slave Leia pattern by CraftyTibbles. I didn't follow all of the pattern, obviously. But I used it heavily. Her patterns are great for person-shaped character designs that pop into your head and natter at you until you make them.

Anyway. It was requested that I make "Geralt's one true love" to keep him company on B's shelf at work. Well, anyone who knows me knows that Triss does not fit that role in my world. But Yennefer is too regal for me. Too detailed. And the idea of trying to get her hair right makes my head ache. So Triss it is. B likes her better anyway (cue my grumbling).

With luck he won't see this post (I don't think he ever checks unless I send him the link anyway) because I'm trying so hard to hold onto this doll for three more days. It'd be novel to give him a gift on the right day for once.

Reference (from the additional content that came with Witcher 2 on GOG): 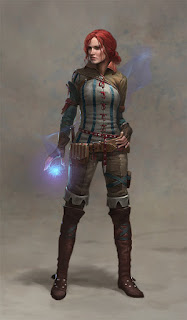 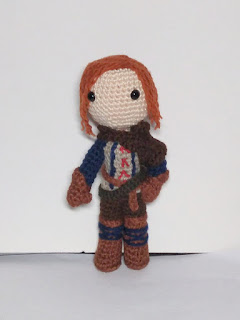 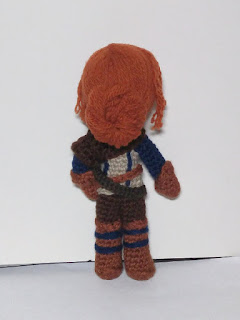 Her hair isn't perfect. Okay. Nothing about her is perfect. But I think I did a decent job all the same.
No comments:
Older Posts Home
Subscribe to: Posts (Atom)